Memphis “M” Engel is stubborn to a fault, graced with an almost absurd knowledge of long lost languages and cultures, and a heck of an opponent in a fight. In short: she’s awesome.

Ashwin “Ash” Sood is a little too posh for M’s tastes, a little too good looking, and has way too many secrets. He desperately wants the ancient map M inherited from her archaeologist father, believing it will lead him to a relic with the power to destroy the world. M obviously can’t trust him.

Equally desperate to find the relic for reasons of her own, M forms an uneasy partnership with Ash. From the catacombs of Paris, to a sacred forest in Norway, to the ruins of a submerged temple in Egypt, together they crisscross the globe in their search. But through it all, M can never be sure: Is she traveling with a friend or enemy?

In their latest collaboration, Burns and Metz prove once again the magic that happens when two talented mystery authors work together. Going on M’s journey will have readers’ hearts race with every page. With its dangerous secrets
and dark mythology, I Do Not Trust You is irresistible to any fan of YA thrillers.

As you probably guessed from the 4-star rating, I really enjoyed I Do Not Trust You. With its mythology and travelling-the-world-and-finding-clues elements, this book gave me total Rick Riordan x 39 Clues but YA vibes—two of my favorite things to read when I was younger.

Let’s start with the characters. Firstly, there’s M, short for Memphis (named after her father’s favorite Egyptian city-state). I loved reading about M: she’s more than capable of defending herself, and also ridiculously smart. (She actually reminded me a bit of Sherlock mixed with Frankie Landau-Banks.) She’s a badass. Then we have Ash, short for Ashwin, the sweet, polite, and slightly mysterious guy who shows up to tell M that her father is alive after supposedly being dead for months.

One of my favorite things about I Do Not Trust You is the enemies-to-friends relationships between these two characters. I enjoyed reading the banter between the two of them, and I loved how they slowly gained trust for one another.

I also liked that there was just a small hint of romance—there was chemistry, but the focus of the book was on the mission. Don’t get me wrong, I am a fan of fluffy, romantic books too, but the way the authors prioritized other elements of the plot, like finding ancient artifacts and fleeing from cult followers, felt right for the story.

Speaking of ancient artifacts and fleeing from cult followers, the mythology aspect of the book was another one of my favorite parts. There is a focus on Egyptian mythology, but lots of other mythologies are sprinkled in as well. The way that myths and magic were used in the book’s plot created what I thought was a highly interesting discussion of religion.

Since most of the book was centered around M and Ash flying around the world searching for pieces of an Egyptian statue, there was a whole lot of travel in I Do Not Trust You. I loved reading about all the places they visited, from caves in Italy to a festival in India. That said, the speed at which the characters moved from place to place did make it seem like each setting had untapped potential, but all in all, I was a huge fan of the travel aspect of this book.

Other than that, my main complaint has to do with the way the book ended. It felt like everything happened so fast, and the writing could’ve been a bit stronger near the end—there were some loose ends that weren’t really tied up. (Like there’s this minor character named Veronica who seems to be important to the plot near the end but is never really explained?)

Other than those very minor negatives, I greatly enjoyed journeying across the world with M and Ash. The characters were great, and I really liked the mythology and travel aspects of the story. Definitely recommend!

Are you interested in reading I Do Not Trust You? Are you a Rick Riordan and/or 39 Clues fan? Talk to me in the comments!

Thank you to Wednesday Books for including me on the blog tour and for providing me with a review copy of this book! This in no way affected my review and all opinions in this post are my own. 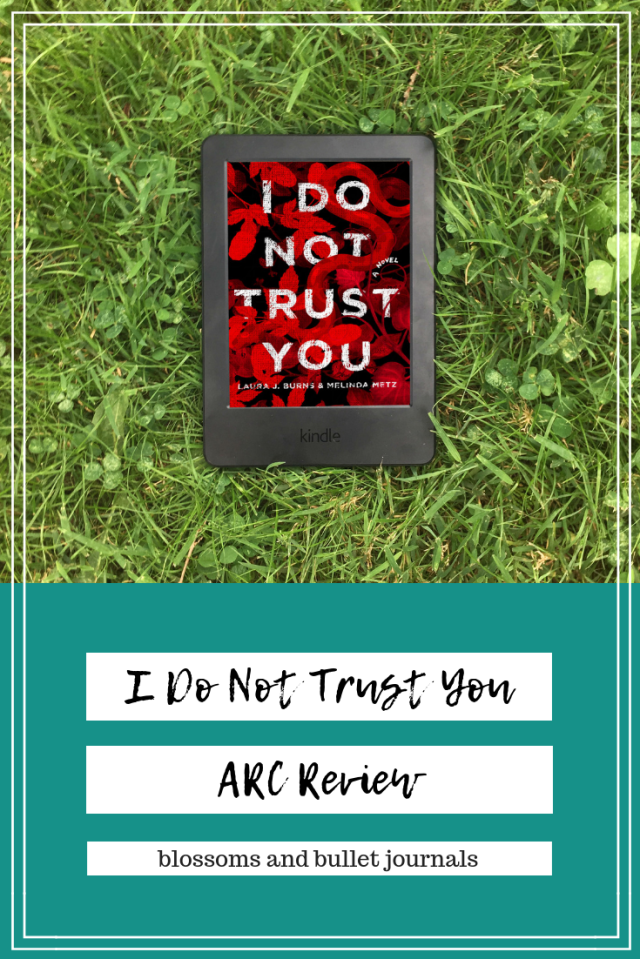