What’s this? Two posts in three days! Nice! Anyway, today, instead of sharing ONE book review, I’m sharing TWO! Because the only thing better than a book is multiple books.

I’ve seen this mini review format on a number of blogs, including Paper Fury, Bookshelves and Paperbacks, and The Bibliologist, so thank you to those blogs for the inspiration! Below you will find mini reviews of The Trials of Apollo: The Hidden Oracle and Magnus Chase and the Gods of Asgard: The Sword of Summer, both of which are written by Rick Riordan. They are also both the first books in their respective series.

I have a confession; I was very hesitant to read any more Riordan books. To explain why, let’s back up a bit and I’ll detail all of my experience with Riordan’s work: I fell in love with the Percy Jackson books when I was in second grade. Like so many others, I found the story to be awesomely original and just so much fun to read.

I went on to read Riordan’s Kane Chronicles, which I enjoyed, and the Heroes of Olympus series. That one I didn’t enjoy quite as much. Don’t get me wrong, I still liked them. But as I remember it, they just weren’t as good as the original Percy Jackson books. Plus, it was kinda mushy-gushy for my taste. There’s nothing wrong with romance, but when I’m reading my middle grade fantasy series about demigods and monster-slaying, I like the romance in moderation. I remember feeling like half of the books were just couples stuff.

So I didn’t read either of the new Riordan series that released in the past few years. I thought that any new books would be unoriginal, just building off of the Percy Jackson quintet, and I thought there was no way the new ones could be better than the originals.

And I wasn’t wrong; much like Harry Potter and the Cursed Child, once I finally decided to give Apollo and Magnus a try, I found that I didn’t like the books as much as the original series. However, I realized that that’s okay. The newer books may be building off of the same concepts and characters from the first ones, but that doesn’t mean there isn’t value in reading them.

Okay, enough of my rambling, let’s get to the actual reviews! 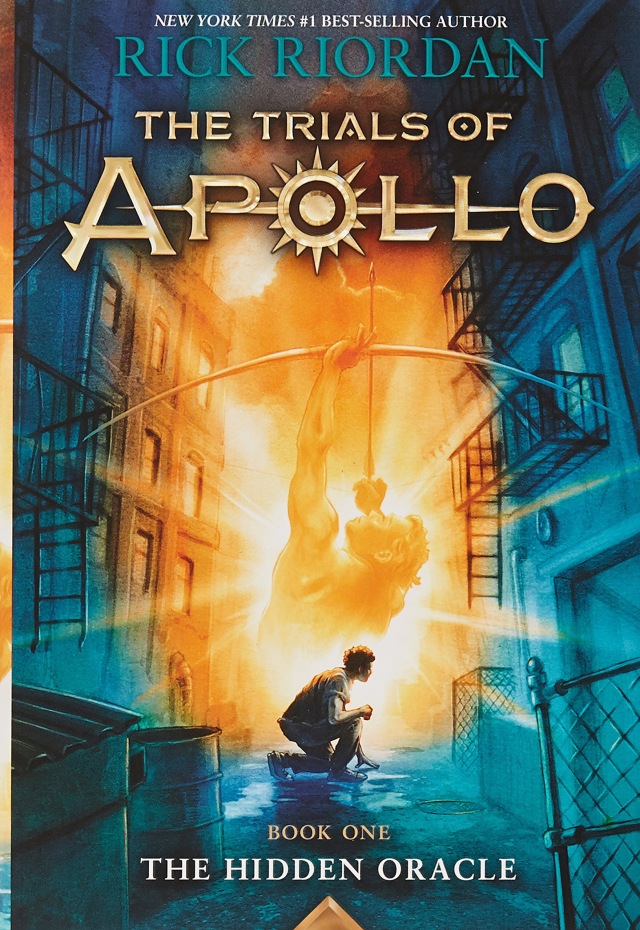 Not sure what this means? Learn more about my rating system here.

For the most part, I liked The Hidden Oracle. It’s a funny, action-packed, and overall enjoyable read for fans of Rick Riordan’s previous Greek mythology-themed books.

The basic premise is that the Greek god Apollo is dropped to Earth by Zeus and forced to live as a mortal as a punishment. He (involuntarily) becomes the servant of a twelve-year-old demigod and journeys to Camp Half-Blood seeking help and answers. It was most definitely not as good as the iconic Percy jackson series, but it was still fun to read about the same characters and world. I liked that Percy was in the book, but he had a small role. Another aspect I loved about this book is the haikus that begin each chapter. They’re hilarious, and help set the book apart from Riordan’s others. Here’s a sample:

The main complaint I have about this book is that I felt like Apollo’s character was kind of…annoying. Idiotic. I get that he’s a god, and he’s supposed to be full of himself, but his extreme egotism made him a bit of a flat, irritating character. There is some character development, and his personality is rather unusual, which can be a good thing, but still, I found it annoying. Maybe it’s just me.

There were some things I liked about the character, though. It interesting that the book was written from the perspective of a god, something Riordan hasn’t done before. Also, Apollo is bi! It’s pretty cool that such a hugely popular author is writing about diverse characters.

Otherwise, I found this to be an enjoyable book., and it was good enough that I will most likely read the sequel, assuming my unnecessarily large tbr pile doesn’t fall and squash me before I get a chance. #relatable

The Sword of Summer 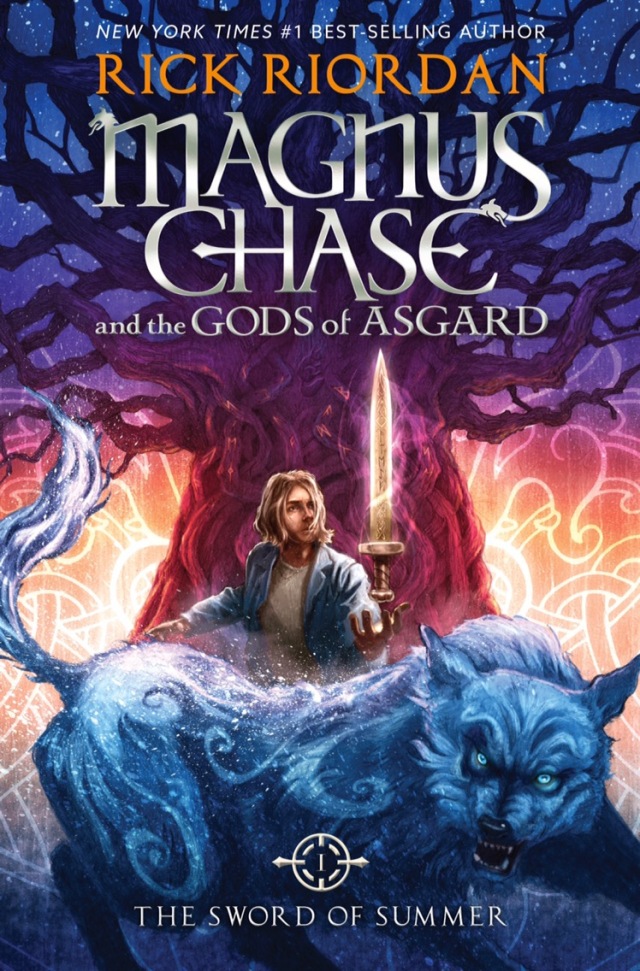 Series: Magnus Chase and the Gods of Asgard (#1)

Not sure what this means? Learn more about my rating system here.

I liked this one, too! While The Hidden Oracle features characters from Greek mythology, The Sword of Summer is based on Norse mythology. I enjoyed learning about a new set of gods and myths, and it was a nice change from the same old ones that Riordan has been writing about.

At the beginning of the story, our protagonist, Magnus, isn’t having the greatest life. His mom was killed two years ago, and he’s been living on the streets ever since. When weird things start happening and Magnus ends up facing this weird fire giant, he  dies. Yup. He dies. Don’t worry, that’s not a spoiler. It happens at the very beginning of the book. If that’s not an awesome way to start a story, then I don’t know what is.

I loved the side characters in this book. Most of Rick Riordan’s books have diversity, and this one is no exception:

These three, all outcasts, were fun to read about.

I couldn’t resist smiling at the friendships in this book, whether it be the between the characters mentioned above, or Magnus’s hallmates in Valhalla, whom I loved.

Also, there was NO romance whatsoever! Like I said earlier, I have no problems with romance; in fact, I enjoy reading romantic books. But it was just super refreshing, especially because, like I said earlier in this post, the excessive mushiness was one of my main problems with the Heroes of Olympus series. Like, Magnus didn’t even have a crush on anyone.

Now, let’s talk about Magnus himself. He’s a sarcastic teenage boy. Aside from being homeless, there’s not much that sets him apart from Riordan’s other protagonists. I do like that the main character in this book is homeless, because homelessness is totally underrepresented in mg/ya lit; I don’t read about homeless characters very often. But other than that, he just doesn’t have much personality. He’s brave. His dad is a god. He’s still figuring out how to use his powers. All stuff we’ve seen before.

Ultimately, I gave The Sword of Summer a half star more than The Hidden Oracle because a) the friendships were so sweet, and b) it’s Norse mythology.

Side note: No, it is not a coincidence that Magnus shares a last name with Annabeth! Yes, she is in the book! Annabeth (from the Percy Jackson series) is Magnus’s cousin. She has a brief cameo, and it made me so happy! There are other little easter eggs, like when Magnus’s sword scoffs at the idea of a sword disguised as a pen.

Overall, both of these books were pretty good. In my opinion, the one major flaw in both of them were the main characters. Other than that, they were pretty solid.

Gosh, this was pretty long! If you read all the way to the end, I applaud you! Tell me in the comments, did you like these books? Are you a Riordan fan? 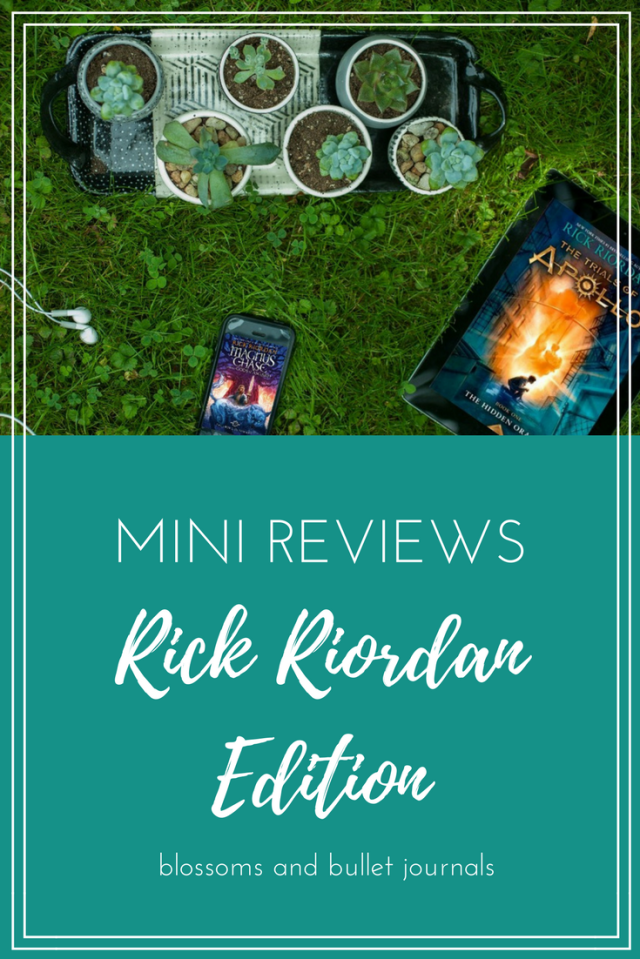